My breaker keeps tripping. Can I just replace it with a bigger one? 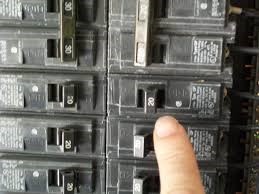 Breakers are protective devices, similar to governors on vehicles to control speed, or door stops to keep the door from damaging something. When installed correctly and properly sized, breakers are designed to protect wiring and devices from overheating and potentially causing a fire.

When the breaker is tripping, it is almost never a good idea to replace it with a larger one. Here’s why:

When it may be OK to replace a breaker
Sometimes, it may be OK to increase the size of a breaker to allow for motor load startups (e.g., air conditioners). This is something allowed by the National Electrical Code and most inspection authorities. But it pays to ask an expert on this first.

What about fuses that keep blowing?

In the case of a fuse that keeps blowing, it’s even more important NOT to just replace with a larger one!
Most newer houses don’t have fuses. If you have them, chances are that your wiring is older, with insulation that is not as heat resistant, and you have more likelihood of deteriorated wire terminations, etc.

In other words, it can be even more dangerous to upsize fuses because of age and wear. DEFINITELY CONSULT AN EXPERT before replacing fuses with a larger size!

We’ll Never Leave YOU In The Dark!