What is an ACFI, and why do I need it? 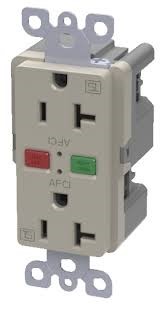 AFCI (Arc-Fault-Circuit-Interrupting) breakers and receptacles (also known as AFI or simply “arc-fault”) have been on the scene since the early 2000s. Beginning with the 2014 National Electrical Code (NEC) they are being required almost everywhere in residential applications that is not already protected by a GFCI.

What is the difference between GFCIs and AFCIs?

Both have test buttons. Both protect. They look alike. (You may not be able to tell the difference unless you look closely!)

After that, the differences are HUGE. GFCIs protect from differential current—i.e., what’s coming in and what’s going out. (See our GFCI article.) AFCIs, on the other hand, protect from FIRE. They are designed to save lives. Thus, they are taking on a prominence that will only be increasing, and they are adding to the costs of construction significantly—typically, AFCI breakers cost between $40 and $80, and receptacles around $30 or more.

How does and AFCI work?

AFCIs are a bit more complicated to explain than GFCIs, because they measure two things: arcing (electricity traveling through the air or other substance instead of wires) and current (load). They have sophisticated electronics that read the sine waves and sense whether there is arcing going on—e.g., if you have a lamp cord that is pinched and is starting to arc.

BUT they measure something else that gives homeowners (and uneducated professionals) fits: current. They may sense that a lamp cord is pinched, but not trip until a certain level of electrical flow (current) is reached—say, 5 amps. So you have a pinched lamp cord behind the sofa that is arcing, but it’s only drawing 1 amp. You then plug in a vacuum cleaner on the same circuit and—voila!—the circuit trips! What is your conclusion? Either bad vacuum cleaner, or bad breaker.

Where are AFCIs required?

Think “everywhere you have a 120-volt circuit.”  Prior to 2014, they were only required in bedrooms. But beginning with the 2014 NEC, they will be required almost everywhere in the house! Fortunately (or not, depending on your viewpoint), enforcement may lag behind for several years.

What are the problmes with AFCIs?

Just as GFCIs caused problems in the early days, so are AFCIs now. There are still some glitches to be worked out. Flat-screen TVs seem to be a problem—maybe because the circuitry has enough load AND something that the breakers see as arcing. Eventually, the bugs will get worked out. Meanwhile, hold onto your seat.

What's a homeowner to do?

Unfortunately, not much. The tsunami of “safety” will ultimately rule. AFCIs are, really, a good thing. But safety comes at a cost.

To deal with it psychologically, probably the best thing to do is to ask yourself, “Would I spend these extra dollars to save the life of a baby in an apartment?” It does make it easier for most of us. We want to be altruistic. We want to help save lives.

If in doubt, call someone who KNOWS electricity, and someone you TRUST for advice. In this case, it may take some searching to find someone who understands AFCIs—but ultimately, it will be worth it.

We’ll Never Leave YOU In The Dark!